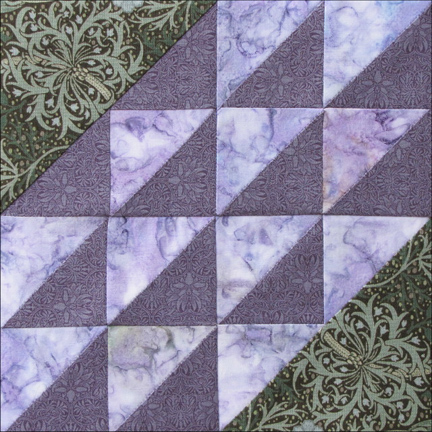 Ocean Wave by Becky Brown
Becky put a little seaweed in the corners of the Ocean Wave. 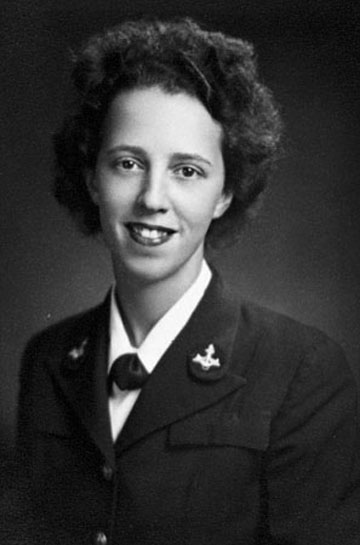 Each generation fights for rights the next generation takes for granted. My friend Erma Hughes Kirkpatrick was a generation older than I. She enlisted in the armed services during World War II. The concept of women as support troops was an idea my generation took for granted during the Viet Nam years, but Erma was a pioneer in the Navy. 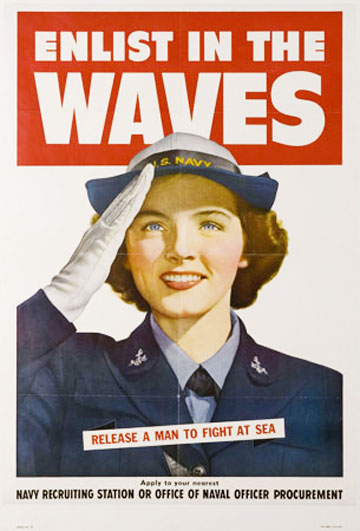 In 1943 she was one of 27,000 women who joined the WAVES, a pretty acronym for "Women Accepted for Volunteer Emergency Service." The E for emergency meant that women in the Navy were there only for the duration, although post-war attitudes changed and the women's divisions became permanent in 1948.

Erma found the perfect spot for her bright mind and degree in psychology as a cryptanalyst in Washington D.C., reconstructing coded communications from the enemy. About ten years ago an interviewer from the Women Veterans Historical Collection at the University of North Carolina Greensboro talked to her. From that transcript:

"[I] ended up in the unit that was reconstructing Japanese codes. It was a naval intelligence unit that was largely responsible for our winning the Battle of Coral Sea, because we were reading the naval traffic and knew what ships were going to be there. So that unit was very proud of that work....But what we were doing—and they would hang me if I'd told all this earlier, but when messages are sent from ship to ship, from naval unit to naval unit, they must be encoded. One job, if you're a cryptographer, is to decode from the codebooks you have. If you're a cryptanalyst, you try to reconstruct the code they're using, which they change occasionally. You try to build it up and reconstruct the code so that future intercepted messages can be read.

"One of the things I did at one time was to do research at the Library of Congress, because a message would come through, and it would refer to a ruler of a certain country or a certain world event involving a person, and they couldn't tell what the word was. So I'd look up like whom they might be referring to, what official, and find that in the Library of Congress or New York Times or in some other records book. So you sort of do it backwards. You figure out what the codes were.

"There was a group who did the brainwork.... They worked in what we call the 'booby hatch,' the big minds, and the people who really could do the figuring out. I didn't do any of that. What I did was very routine....there were just a very few women in this unit....Definitely a minority. But I made some really good friends, and they'd have stag parties, and I was included, and they never thought anything of it. They had stag parties, and I came, too. So I had a good time. I made warm friends, and wartime Washington was very friendly to an unattached young woman. It was a very rich experience." 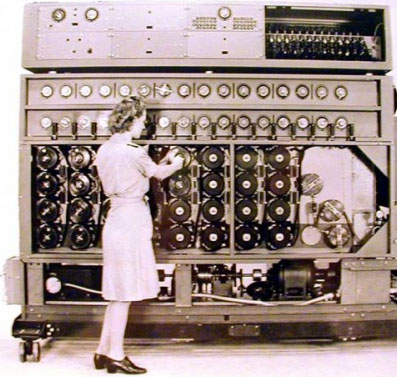 A WAVE and a code-breaking proto-computer in 1943.

While we sewed Erma used to tell us the stories about her days in Washington. We wanted to hear about how she battled for respect and her rights, but like many women of that generation whom I've interviewed she didn't see the battle as we did. She accepted more, as she told the interviewer:

"I haven't felt a lot of discrimination. I recognize that there is discrimination. Partly, it's because I accepted the role of women. There were six girls in my family. My two brothers, who were the youngest, didn't understand why women were clamoring to be equal. They thought they had grown up under sort of a little suppression themselves. They didn't see why women wanted equality—they already had it. My husband never treated me as anything but an equal, so I've not felt keenly discriminated against." 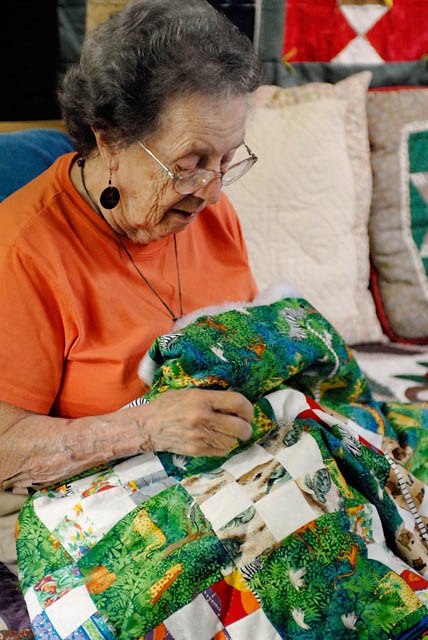 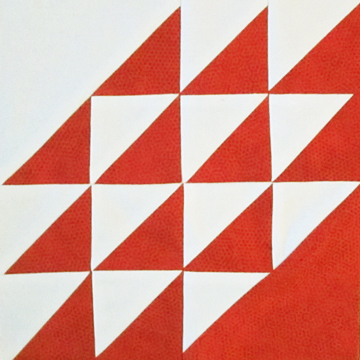 We can remember the first women who joined the Navy in 1943 with Ocean Wave. The pattern was very popular in the late 19th-century, published as Waves of the Ocean in Hearth & Home magazine about 100 years ago and as Ocean Wave by Ruby McKim about 1930. 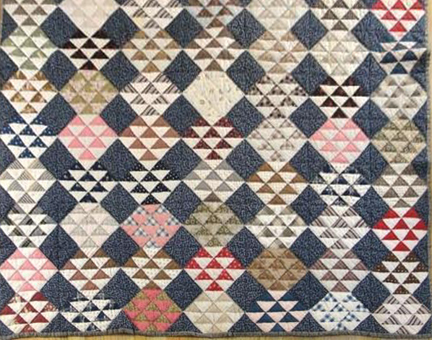 The basic unit is the six-sided shape of triangles---an elongated hexagon, similar in structure to last week's Grandmother's Dream. Above the hexagon alternates with squares. In the pattern here it's set with larger triangles to fit it inside a square block.

See BlockBase #1323
If you want to re-size the pattern use #1323. This block is similar. Use 1323 to calculate the sizes for A & B, and then shade and cut the triangles to match the pictures here. 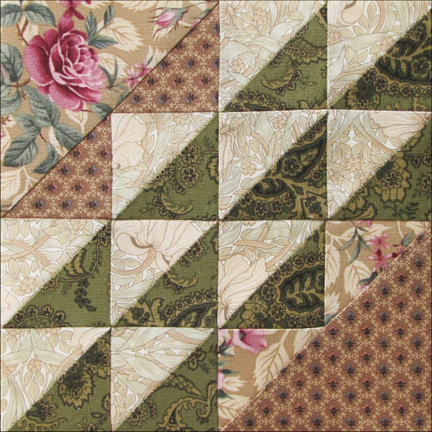 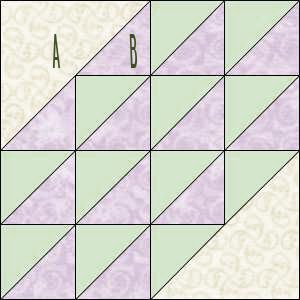 Cut each in half diagonally to make 2 triangles. You need 24 smaller triangles. 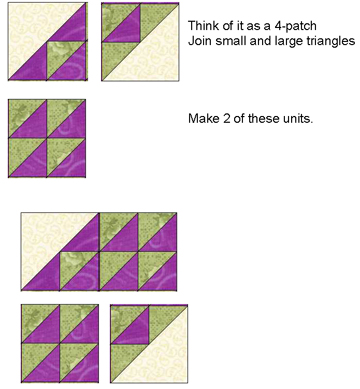 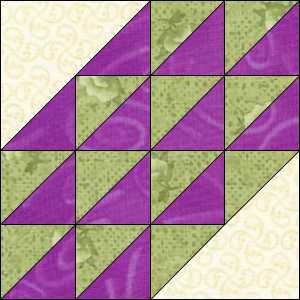 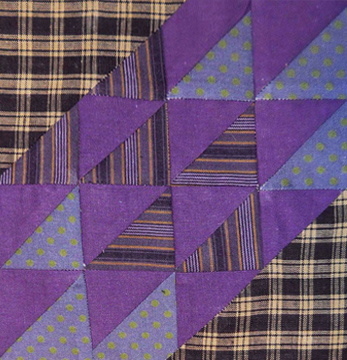 Ocean Wave By Dustin Cecil
Read the interview with Erma Kirkpatrick from The Betty H. Carter Women Veterans Historical Project at the University of North Carolina at Greensboro here:
http://library.uncg.edu/dp/wv/results5.aspx?i=2699&s=5 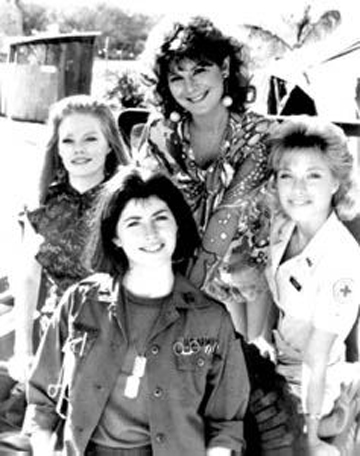 It took another generation or two for women to go beyond support troops. This photo from television's China Beach (thirty years ago) shows actresses portraying nurses and entertainers in the Viet Nam war.