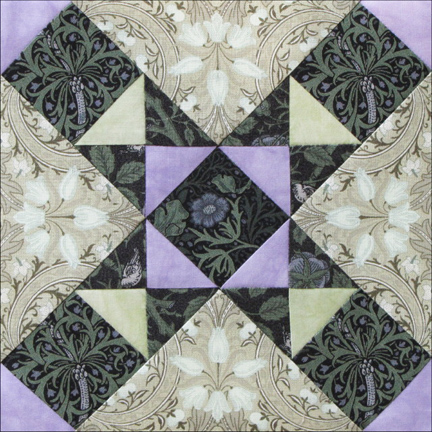 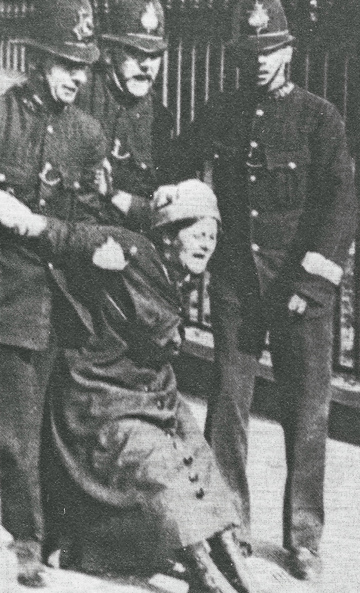 In 1909 battles between the London police and the Women's Social and Political Union reached an impasse.
The back-and-forth game of  WSPU civil disobedience and routine arrests was escalated when the women began prison hunger strikes. They hoped to disgrace the government led by H.H. Asquith and the Liberal Party. 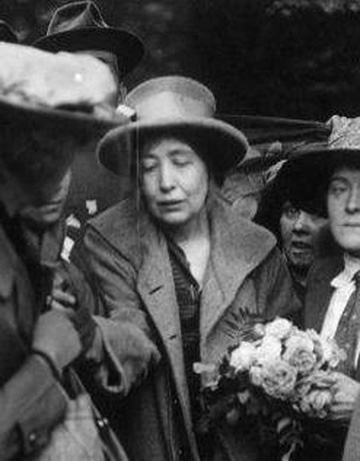 Sylvia Pankhurst after a hunger strike, greeted by her
mother and supporters with bouquets 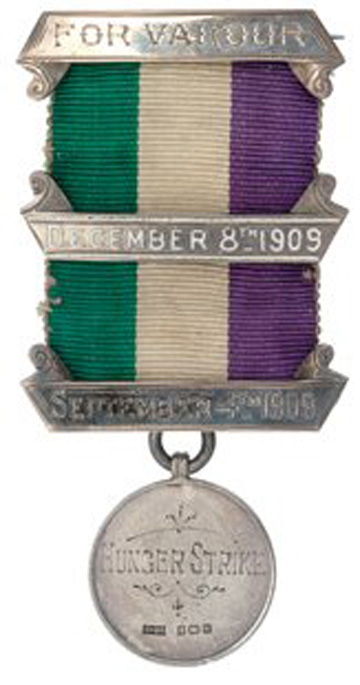 WSPU medal for valour in a hunger strike, 1909

Initially the government responded to this move by releasing the prisoners. In 1912 the government changed tactics and prison staff began force feeding. Protesters served their four-or six-month terms without voluntary meals as jailers using tubes and brutality kept them minimally nourished. 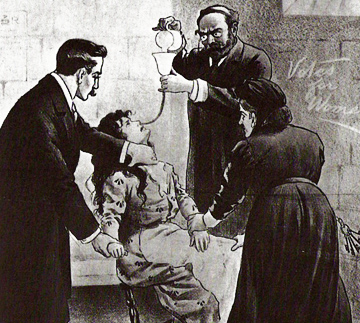 Here in a WSPU image a woman prisoner
is restrained and fed through her nose
by a diabolical doctor.

The WSPU characterized the tactic as torture and likened it to rape, a campaign effective enough to force the government to introduce a new battle plan in 1913. They jailed the hunger-striking women until their health was in danger, released them in a form of parole to regain their strength, then arrested  them again. The WSPU dubbed the "Temporary Discharge for Ill Health Act" the Cat and Mouse Act, showing their continuing skillful manipulation of the media. 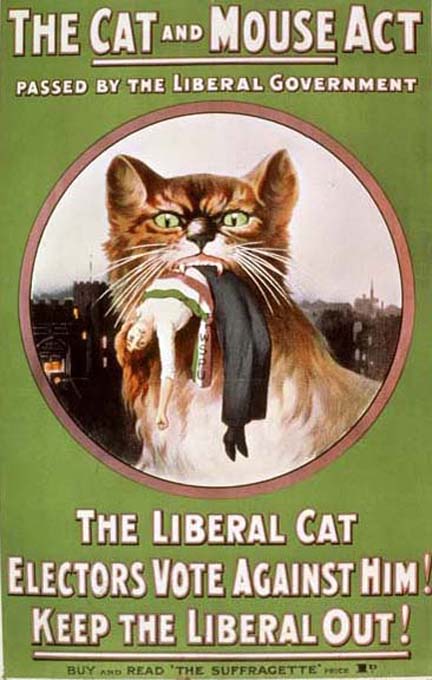 The cat was the party in power toying with the WSPU.
Or was the cat and mouse game a parry and thrust by both sides? 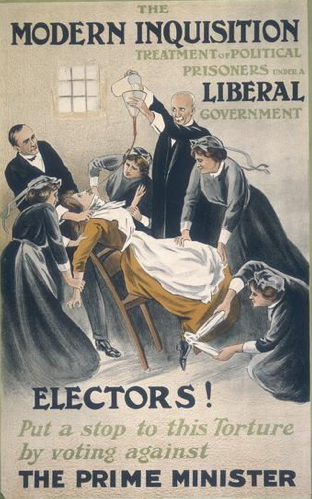 The Cat and Mouse Act and the cycle of civil disobedience and arrest went on in the months before the beginning of World War I. The August, 1914 declaration of European war abruptly changed everything. The Pankhursts pronounced WSPU activities at a wartime standstill.

After the war the WSPU never regained its prominence in the campaign for women's rights. In 1918 the government conceded a portion of their demands by passing a law enfranchising some women (propertied women over 30). That right was not extended to all adult British women until 1928. 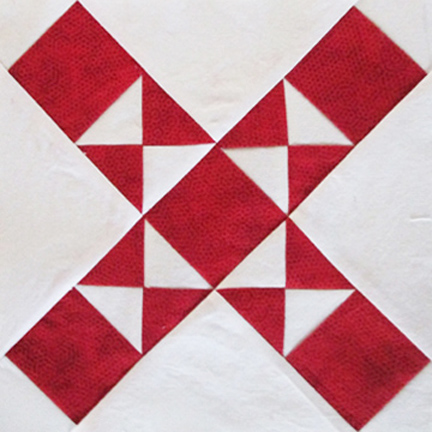 Cats and Mice
By Georgann Eglinski

Cats and Mice is a patchwork pattern given the name by the Ladies' Art Company in the early 20th century.

(BlockBase # 2916 )
Perhaps the cats are the squares and the mice the small triangles. 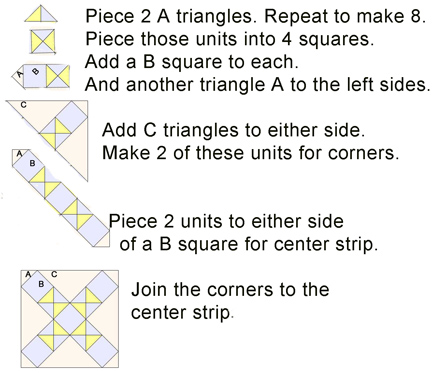 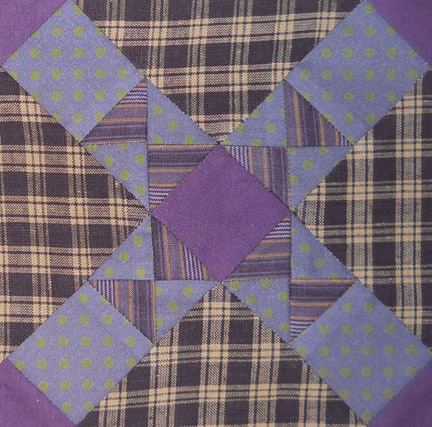 Cats and Mice
By Dustin Cecil 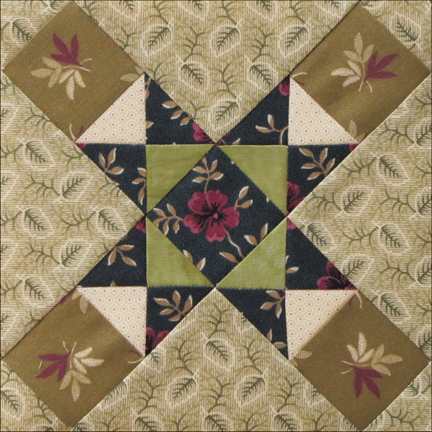 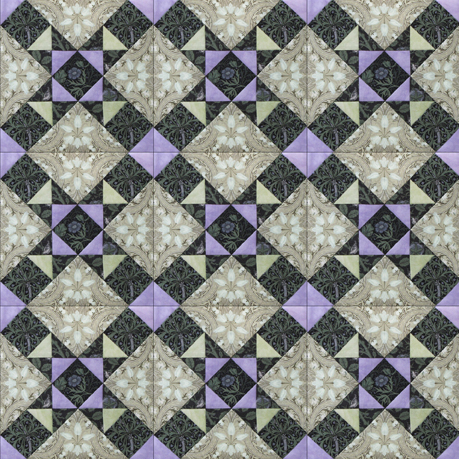 Becky put 9 of her Morris-style blocks together to
make a virtual quilt. The blocks interact in interesting fashion. 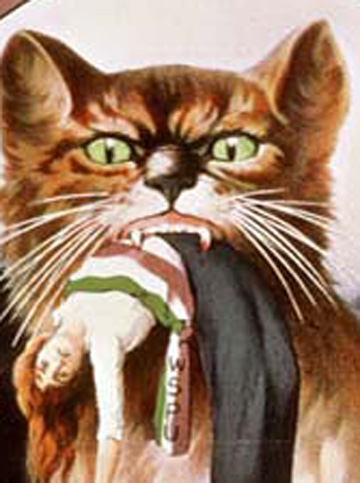